A Columbia University graduate, Dr. Mazzula is an award-winning educator, mental health researcher, and author based in New York City.  She is the Executive Director of the Latina Researchers Network, a tenured Associate Professor of Psychology at John Jay College of Criminal Justice (less than 4% of all professors in the country are Latina), and Former President of the Latino Psychological Association of New Jersey.  She is a speaker, consultant, and trainer on issues of diversity, equity, and diverse workforce and leadership development.

Dr. Mazzula is a much sought-after expert who has extensive mental health research, evaluation and counseling experience with underserved communities.

Her groundbreaking research focuses on social and cultural determinants of stress and trauma, including racism, discrimination and microaggressions, multicultural competencies, and Latina/o psychology. Her research has been funded by prestigious grant awards from the National Institute on Minority Health and Health Disparities, National Institute on Drug Abuse, the Centers for Disease Control and Prevention, and others.

As an evaluator, she is an expert in developing process, benchmark measures and systemic guidelines to assess equitable and culturally responsive research and scholarship, in social framework evaluation analysis of workplace discrimination and inclusiveness. Most recently, Dr. Mazzula was the lead investigator for a nationwide evaluation to assess the state of the field related Latino boys and men well-being.

Her work has been published in scientific journals, book chapters and encyclopedias. She is a Co-Editor of a four-volume encyclopedia, SAGE Encyclopedia on Psychology and Gender by SAGE Publications Inc. with contributions from over 600 scholars and author of Ethics for Counselor: Integrating Counseling and Psychology Standards (expected 2017) by Springer Publishing Company.  Her most noted scholarly works include a co-authored publication on Latino worldviews and racial identity in the Hispanic Journal of Behavioral Sciences (ranked one of the most-read online articles from 2008 to 2012) and, with colleagues at Columbia University, the development of a psychological instrument that measures the impact of racism and discrimination in Psychological Trauma: Theory, Research, Practice, and Policy (ranked top 5 most read articles from 2013 to 2014).

Spoken at 100+ colleges, universities and professional science meetings throughout the country

She has spoken at 100+ colleges, universities and professional science meetings throughout the country. She has appeared on NBC as expert on solving issues of racism and featured on National Public Radion (NPR), USAToday, El Diario NY, Washington Times, Insight into Diversity Magazine, Atlanta Journal-Constitution, Hispanic.com and others.

Dr. Mazzula has received various accolades including Distinguished Faculty Teaching and Outstanding Scholarly Mentorship awards by John Jay College of Criminal Justice, two of three of the most prestigious awards by the College; Emerging Researcher Award by the New Jersey Psychological Association; Soy Poderosa Award by Proud to be Latina (for commitment to the advancement of Latina women); Platinum Milestone Awardby Chi Upsilon Sigma National Latina Sorority, Inc., (for 20 years of service to student development); Professional of the Year Alumni Award by the National Association of Latino Fraternal Organizations (an umbrella organization for Greek Letter Latino organization, for commitment to the Latino community) and various recognitions for outstanding scholarly achievements and grantsmanship by the City University of New York.  Dr. Mazzula is also a member of Elite American Educators and Association for Women Speakers. 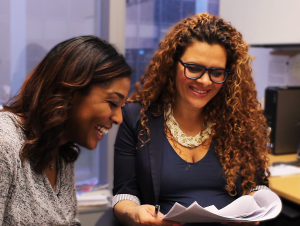 As a first-generation college graduate, Dr. Mazzula is a fierce scholar coach, mentor and social entrepreneur who has dedicated her life to advance ethnic minority populations, particularly Latino women.  Her current focus includes building the U.S. research capacity and increasing the number of doctoral-level scholars and investigators in academia and advanced research careers, particularly Latino women.  In 2012, she spearheaded the creation of the Latina Researchers Network, the country’s first multi-disciplinary network for Latina researchers, scholars and allies, where she manages program design, incubation and evaluation to support retention and recruitment of PhD level investigators. Under her leadership, the Network has grown to 3,000+ nationwide.  Dr. Mazzula has received prestigious awards to support the Network and its activities, including grants from the Robert Wood Johnson Foundation, the Annie E. Casey Foundation, and the American Psychological Association’s Commission on Ethnic Minority Recruitment, Retention, and Training in Psychology Implementation Grant.  In 2017, she launched Doctoral Xchange, a project of Silvia Mazzula Consultancy, aimed at providing elite coaching for professional women interested in, or considering, doctoral level training.

Dr. Mazzula is the Founder of Silvia Mazzula Consulting which focuses on organizational, leadership and personal development in diversity, equity and multicultural awareness, an Associate at Robert T. Carter & Associates offering consultation on legal cases of racial discrimination in the workplace, racial harassment, and hostile work environments, and Partner and Senior Consultant at Northeastern Psychological Consultation, LLC where she provides consultation, staff development and caregiver trainings on youth violence prevention and

She migrated from Uruguay, South America, when she was 9 years old, is a mother of three amazing boys and resides in New Jersey. She earned her doctorate in counseling psychology from Columbia University and completed her formal clinical training at the Rutgers University Behavioral Care – Newark Campus (formerly University of Medicine & Dentistry of New Jersey).